Insanity is available plus Pentimento and I Am Alive FREE for two days! 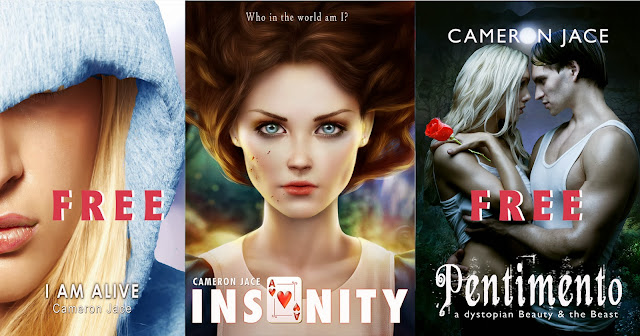 Okay, so it's been hectic but wonderful. But here it is. Insanity is available on amazon (for 0.99 until Christmas) and Pentimento and I Am Alive (rewritten) is are for FREE for two days.

Here are the links:

Hey everyone and happy holidays! Wish you all a great and awesome Christmas and New Year!

Pentimento ( a dystopian fairy tale ) will be available on amazon on December 18th.

Because it has a been a freakin' amazing long year with all of you, there will be a lot of great prices and giveaways this year.

A Kindle Fire or Paper White (the winner's choice), gift cards, and free copies of Pentimento. I arranged the giveaway below where you can enter the giveaway. Wish you all the luck.

Also, stay tuned for a free chapter of Pentimento soon.


The day Iris Beaumont turns seventeen, she is threatened to be taken by the Beasts, the rulers of the new . After the destruction of the world, the Beasts provide citizens with whatever they need in exchange for the one teenage girl they enslave every week. They call them the Brides, and they never comes back. Iris isn’t the worrying type though; she’s been defying the system since she was ten and never cared for the Beast’s rules. Then she meets Colton Ray, who is not like any other boy she’s ever seen. His confidence and dominance are otherworldly she can’t rationalize the attraction she feels for him. had one slight problem though. It’s rumored he is one of the Beast, and Iris could be the next on the Beast’s list.

Here is an excerpt of the book:
Chapter 3

here is the link to purchase Pentimento http://www.amazon.com/dp/B00HDOSGLQ

PLEASE DON"T COMMENT HERE BECAUSE I HAVE A TECHNICAL PROBLEM I CAN'T REPLY. IF YOU WANT TO COMMENT GO TO MY FACEBOOK PAGE HERE https://www.facebook.com/camjace  THANK YOU